GHOST HARDWARE reunites online in order to speculate and visualize how in a world where the outside exists through mere utilitarian routines and as footage on screen, we as individuals can travel through the bodiless folds of the mainstream internet, seeking ludic imagination, momentary interaction, new forms of interuser intimacy, where users navigate and make spaces that can exist in the in between of the real and imaginary.

We will build up these wormholes out of apathy, boredom, perversion, or mere illusion. Spaces where time slows down and intends to recreate through resolution and high detail definition a portion of what we may have lost or simply project our wishes and desires into a new ambiguous dimension. Such is not a theme or a game, but a scape. Escaping the fact that the simulation has taken over the outside world.

Click on the project images to view the speculations in 360

In our current moment, the postmodern flight from the real has arguably been exacerbated by the domestic confinement imposed by the COVID19 Pandemic.

Studio 05: Ghost Hardware challenged us, as students, to respond to this by constructing a virtual space for an online ‘Ghost Forum.’ The forum was to be nested ‘parasitically’ within the ‘corporative’ fabric of the mainstream commercial internet, offering some kind of subversion, critique or response to it.

I began with research into Anonymous Reddit help forums, a contemporary, community driven synthesis of an agony aunt’s column and a gossip magazine. The project was then developed by studying into the aesthetics of secrecy in film noir. 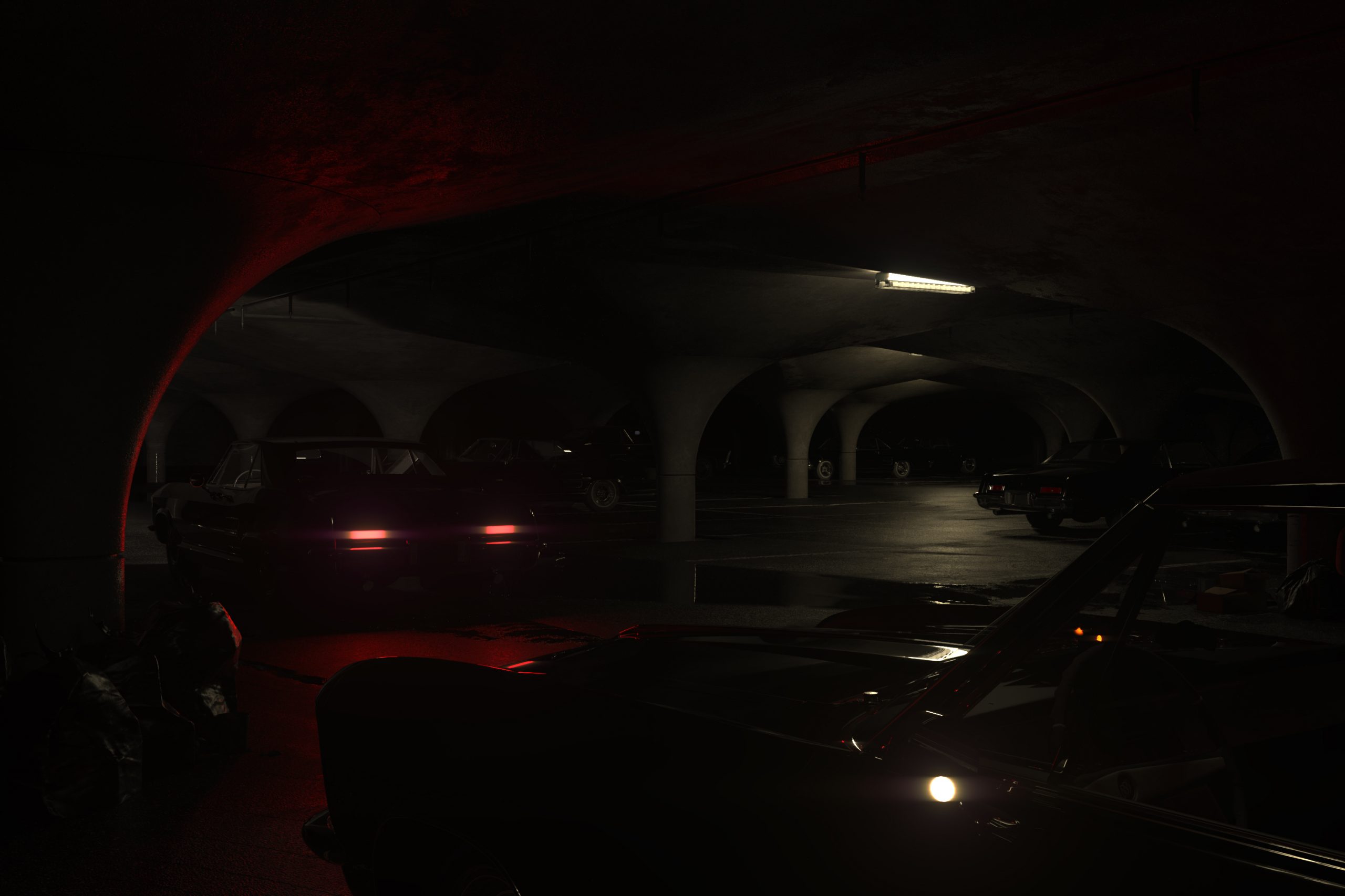 Following the recent implementation of social distancing guidelines across the world, there has been an inevitable increase in use of online communications. But within this shift in social paradigm, one can observe a surge in social behaviours that are often either unique to the digital, or inherited from the physical; the ways people meet, group, present themselves etc. in relation to the online platforms they use.

This project explores one such behaviour in particular, one which amplifies the loneliness of the contemporary individual during these times of isolation. The act of ‘ghosting’; where one ceases communication with another, without warning or justification. One who is ‘ghosted’ is left in a state of suspension, to be resolved internally, and within this state of waiting is a strained duality between opposing expectations; the expectation of presence and an expectation of nothing.

Eventually, with the initial hope of company remaining unfulfilled, the positive expectations decay, leaving little choice but to embrace – to various extents – a nihilistic indifference and alienation. 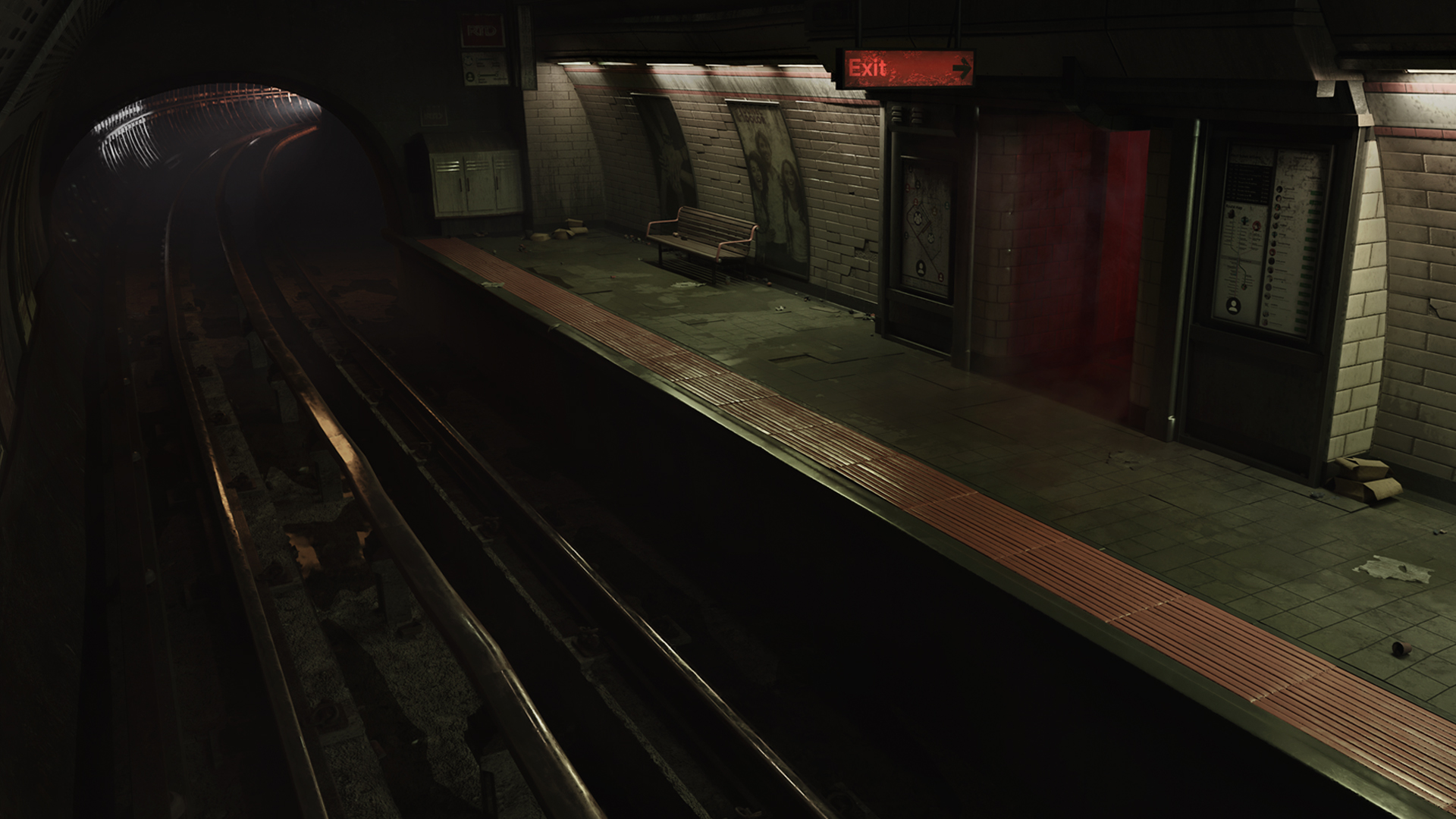 Looking through the speckled windshield at the white landscape beyond I felt a twang of nostalgia. I used to take road trips out here as a young man, taking photos in the snow. Things were different back then, I was different. I couldn’t be alone, silence made me angry, then sad.

But those times are in the past now, frozen like the terrain behind my dirty old windshield. Cigarette butts litter the dash like cherry blossoms. Wild horses crest a hill on the horizon. The silence feels different now, there is something in it I could never see before. 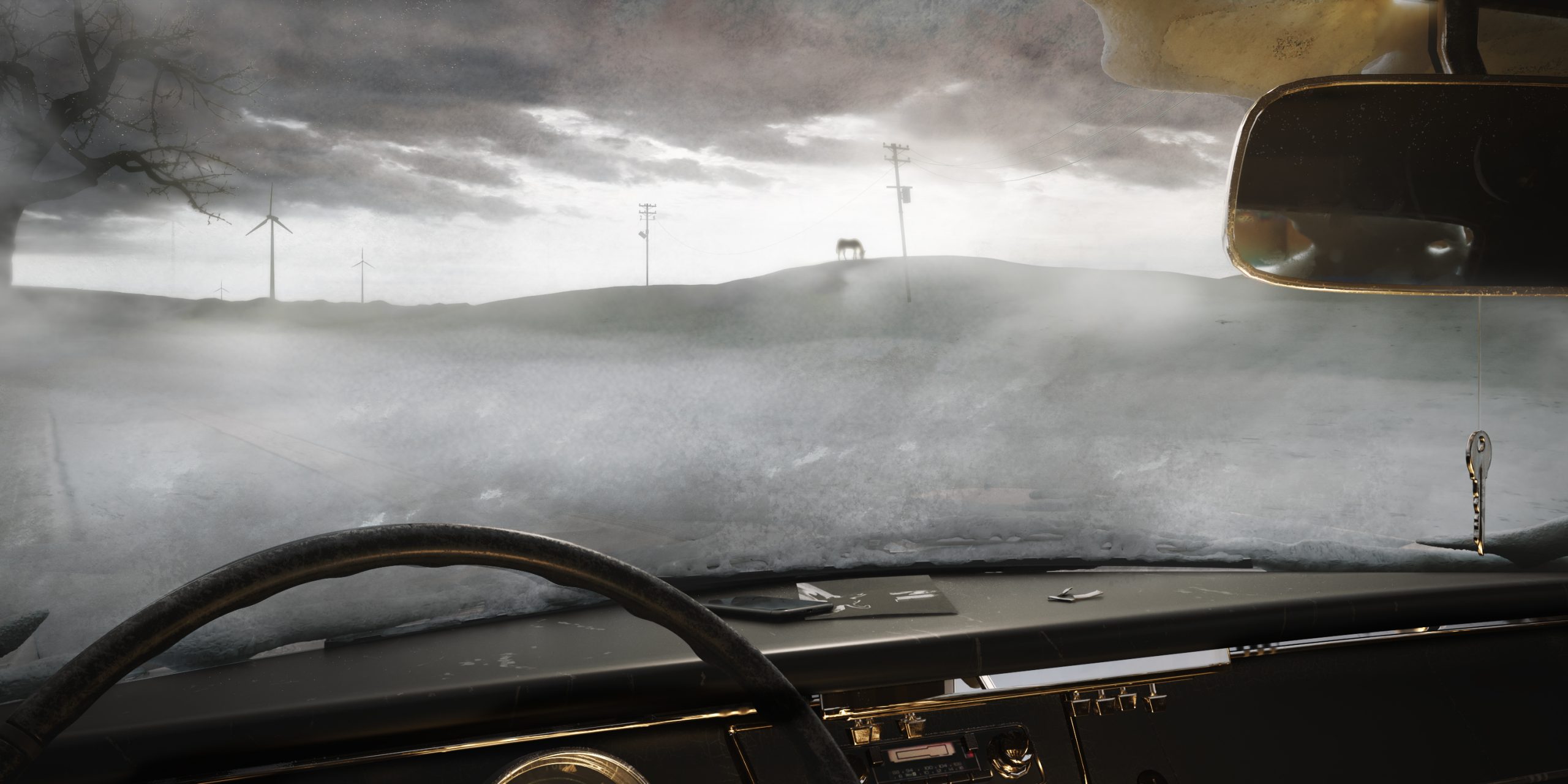 Fake News // Hostages to technologies that no one knows how to control.

In online forums, anonymous users can raise their opinions and views at the same time bombarded by stories not closely related to our lives. We are busy every day to absorb all the information. Our time to ponder on what we received is greatly reduced and to a point, we don’t even have the awareness of finding out what is real and what is not. We get lost in the online forums and stories, not being able to discern what we receive is a simulation of the world or the actual reality.

We want to explore the relationship between fake news and our life. ​

We are the corrupted agents of the internet. Humans are hostages to media intoxication. We created an example of hyper-real environment that could spread disinformation.
These malicious artifacts would integrate into our ‘reality’ together with other digital experiences. Our perception will be ever more susceptible to manipulations.

We are consumers of our own projected realities. Isolated at home, limited human connection, digital fatigue. Frame within frame. A daydream where we are self-aware and consumed with the hyperreal altogether. This project inquires the role of irony in media and representation, and more specifically on the internet in these times of isolation.

From self-aware subreddits to memes, anonymity on the internet allows us to experience a detachment from reality. Viral content is now the currency of the internet as people crave the escapism it offers even if it reflects a self-perpetuating irony, rendering any sincerity online meaningless.

Irony is a self-defense mechanism towards a fear of being really human, to escape reality by poking fun at it. What would a space capable of invoking feelings of human connection within users look like? One that reminds of the hyperreality we live in?

Referencing films like Lost in Translation, A Ghost Story, and the photography of Stephen Shore, the scene paints a dialogue between the banal and surreal, the person and place. Using cinematographic tools like framing, lighting, and composition of symbols, this space assumes form as a lull in the oversaturation of media, a rumination on reality and fiction. 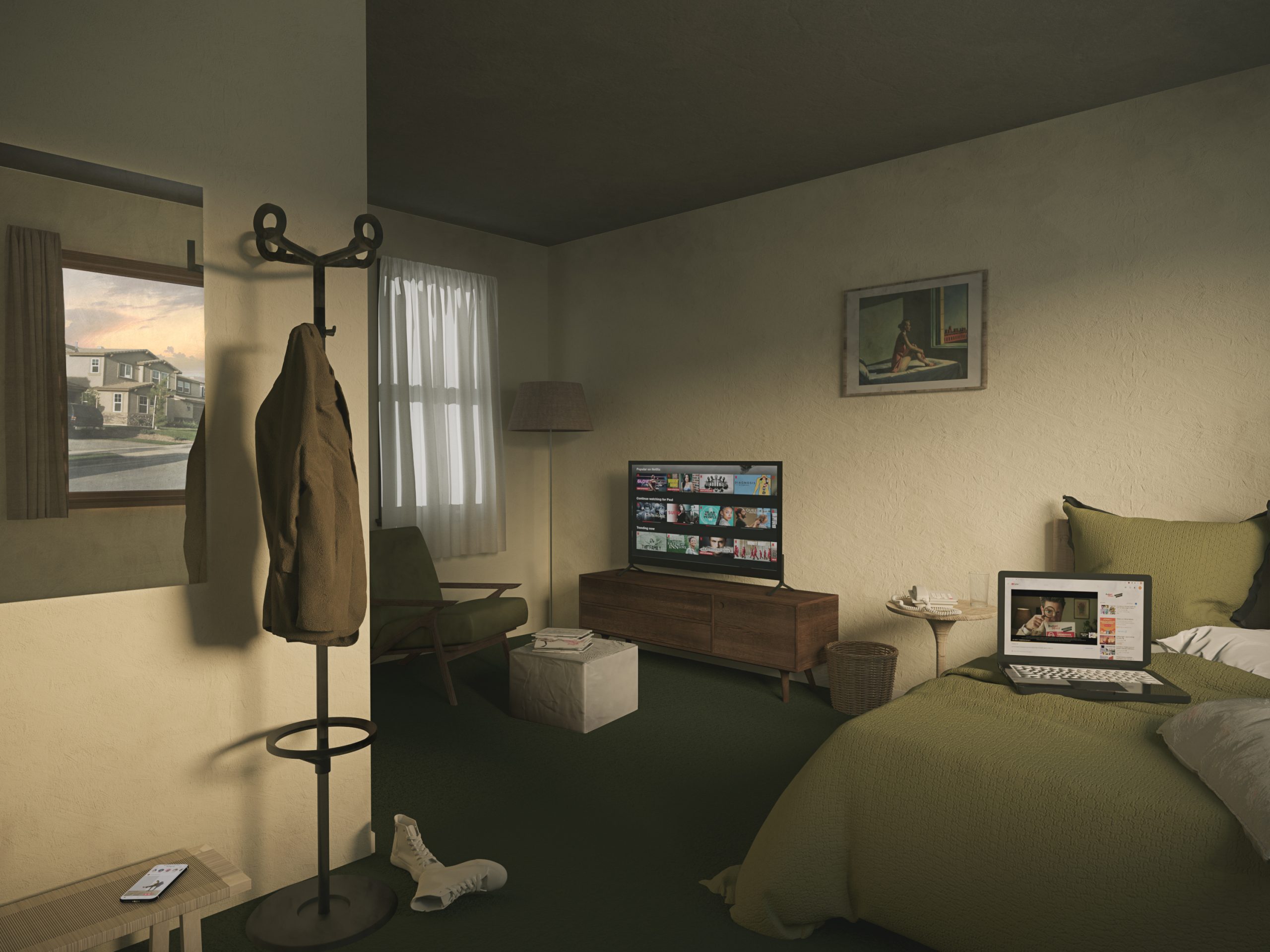 The environment created depicts a bucolic scene that has been infested and defaced by the inherent toxicity in nature and humanity as a backdrop.

Any order in the forest scene has been overrun and denigrated by parasitic plants, aggressive flowers and smothering ivy. At first glance the scene could be confused for an idyllic landscape, but there is an overall unsettling feel; the canted angle, the foundry smoke plume in the background, the sickly colour pallet.

The viewer is held in the scene and begins to notice details; the infestation of the scene, the black pooling water, a tire being pulled into the earth…

The scene is an allegory of the toxicity of humanity on online platforms, defiling the rules and order in their abuse, debauchery and perversions.

The concept initiated from a discussion on the imbalance of power and its policing in online communications. We looked at the idea of cyber bullying occurring in community forums. This form of corruption shows its presence in every layer down a comments page even with the enforcement of terms and conditions. The anonymity and faceless nature of these platforms gives humanity a lack of consequence when communicating which results in a toxicity… the baseness of our race always overruns these threads.