Last year, while the world was in lockdown, the NFT market tripled in value, reaching more than $250 million. In 2014 Anil Dash and Kevin McCoy created ‘Quantum’, the first ever NFT, depicting a short video of a set of spinning dollar symbols inside a picture frame. Post-internet irony aside, this ‘Warholian’ piece is now valued at U$D7 million. Beeple has become a mainstream media phenomenon and sold his work at Christie’s for USD69 million, placing him among the top 3 valuable living artists. The first ever tweet by Jack Dorsey saying “just setting up my twttr” sold for USD2.9 million.

NON-FUNGIBLE TOKENS are in some ways the ultimate post-modern artistic expression where speculative value has replaced substance up to the point where the object of desire is not the representation, but a machine-generated number attached to an image-shell. Art has become a paradoxical collaboration between human input and cybernetic validation, which beyond questioning the value and evaluation of art, has questioned the necessity of the physical or digital existence of the art beyond a unique code and a fuel price for the machine. No longer is the art unique and valuable, without a 14-digit code.

Hence, during this AAVS studio, we delved into the creation of NFTs, understanding them as Ghosts in a Shell – being the ‘ghost’ a machine-generated number, which without its ‘shell’ would lack a body to exist in.

“What if a cyber brain could possibly generate its own ghost, create
a soul all by itself? And if it did, just what would be the importance of
being human then?”
– Motoko Kusunagi

Chosen Scene
The chosen scene occurs towards the end of the film where a shootout between Motoko and a spider tank that is protecting the Puppet Master. What seemed to be the defeat of Motoko, her partner Batou shows up just in time and successfully destroys the tank and retrieves the puppet master.

The specific scene sparked my interest because the composition, framing, atmosphere and mise-en-scene depict the importance of the moment where Motoko and the Puppet Master, who is later revealed to be a computer with a ghost/consciousness expresses its wish to merge with Motoko’s ghost, giving birth to a new single entity. 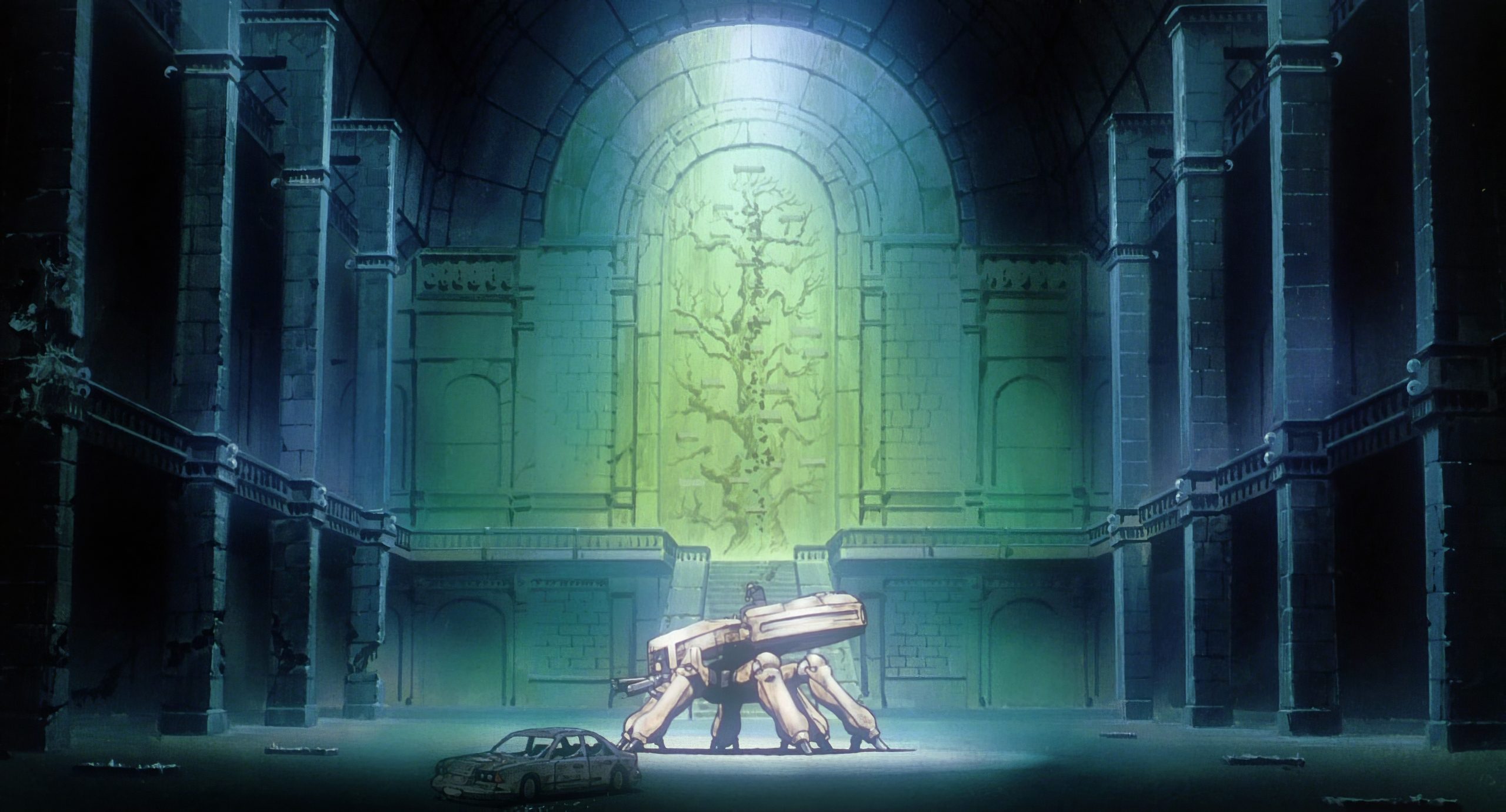 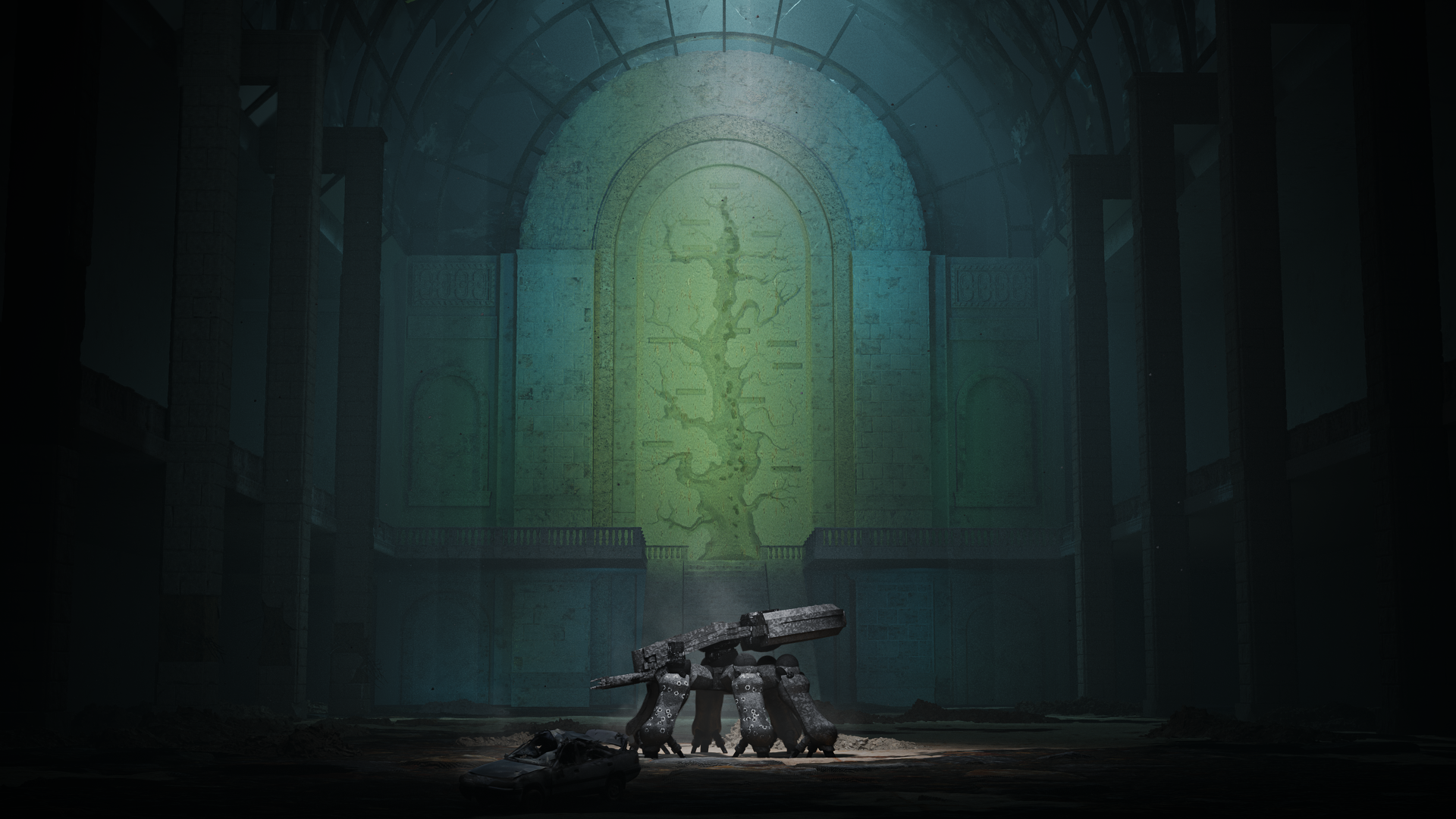 “Man Is An Individual Only Because Of His Intangible Memory. But Memory Cannot Be Defined, Yet It Defines Mankind.”
– GHOST IN THE SHELL

Chosen Scene:
The scene I chose is simple but very strong and shocking. It uses the angle of looking up to highlight the importance of this scene throughout the film. Not only is this thinking in terms of camera perspective, but also in terms of colours that make a deep impression. The brightly coloured ceiling and the black dummy form a sharp contrast as if it tells the audience that people are also surrounded by fear in this seemingly beautiful world. The layout of the scene and the location of the ‘characters’ are also of great significance.

If you think of this room as a shell, the mannequins inside are like human’s ghosts. The mannequins have no hands, which means they cannot move by themselves in this shell. Those dummies are facing the window like us to see the world through the window. Some soul thieves are immersed in their world and cannot extricate themselves. 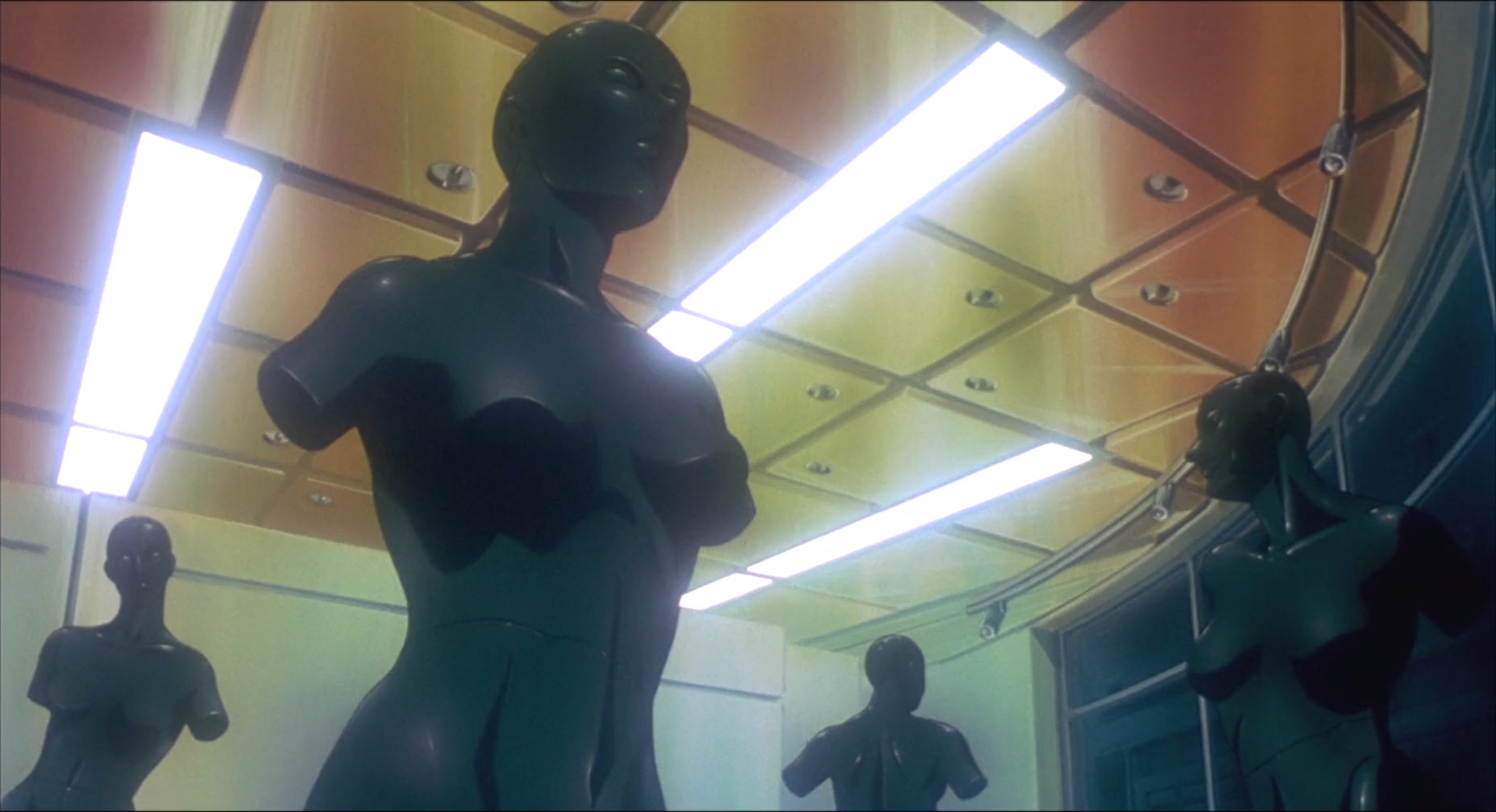 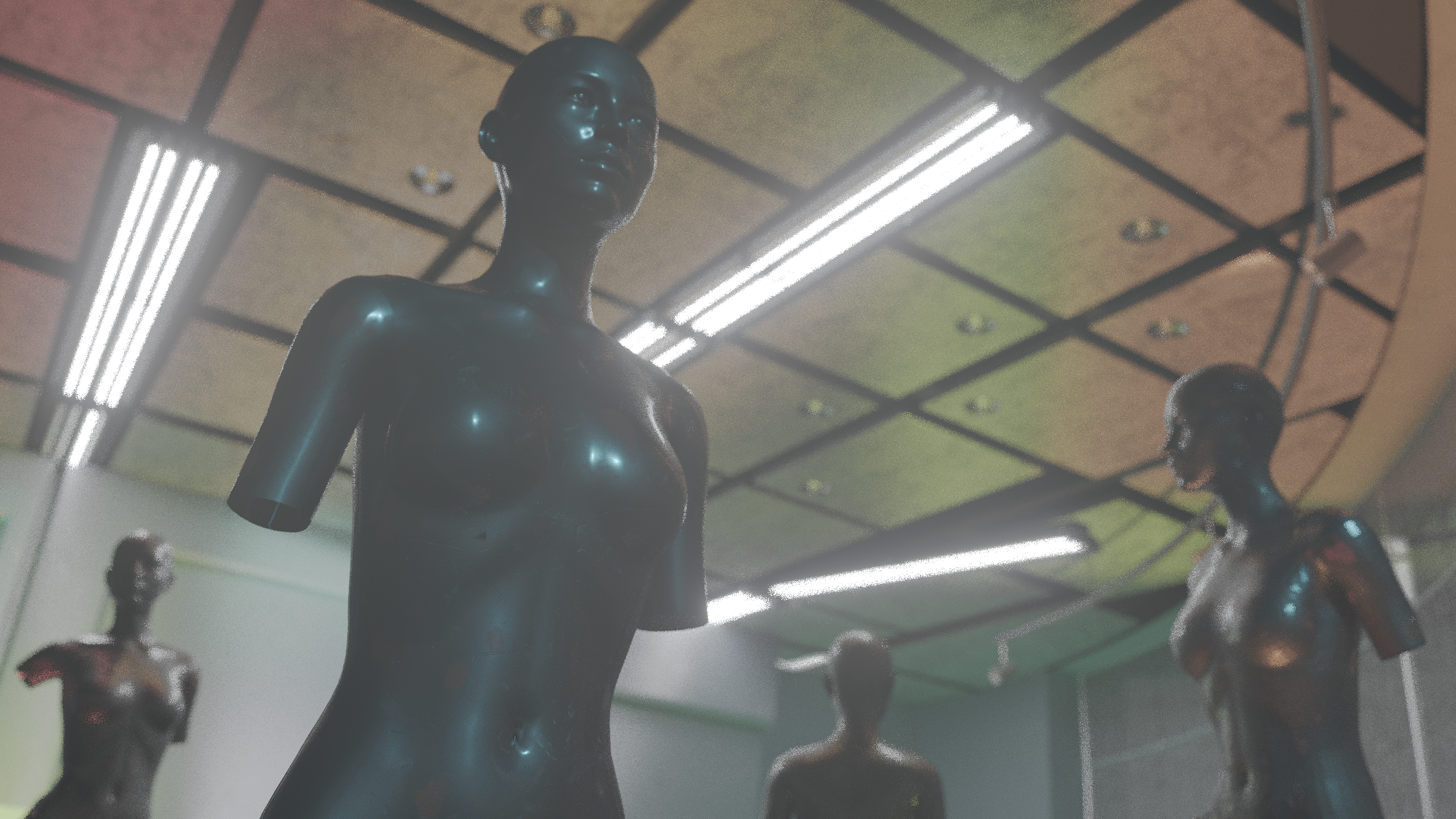 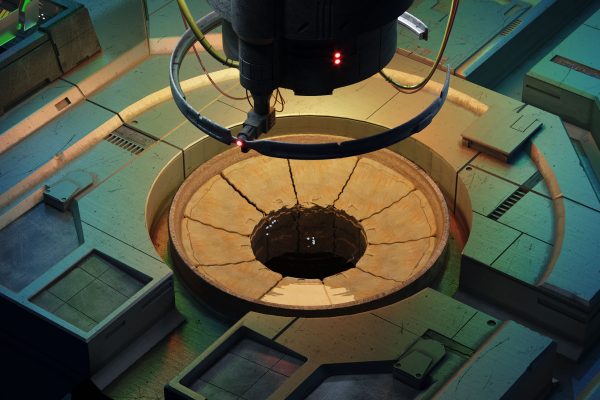 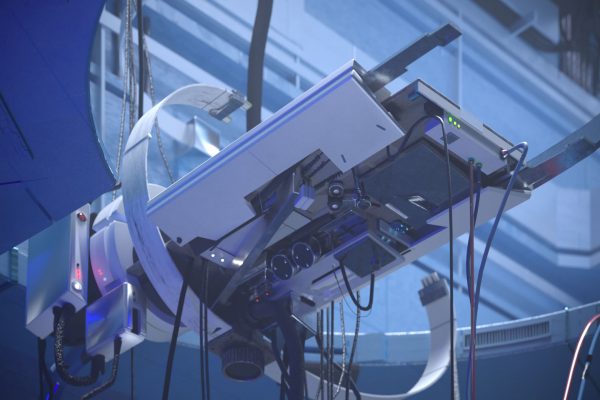 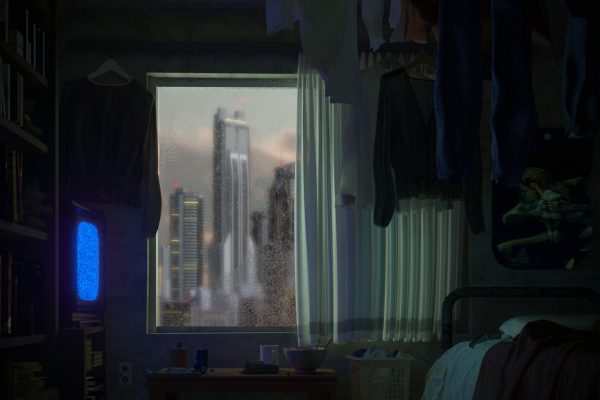 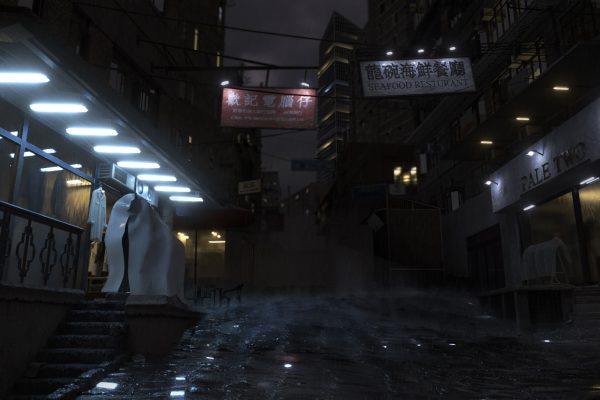 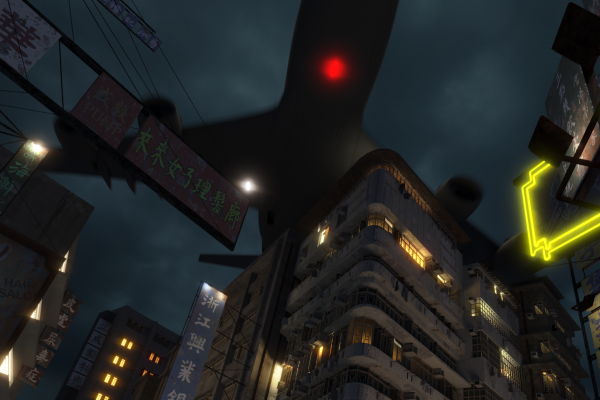 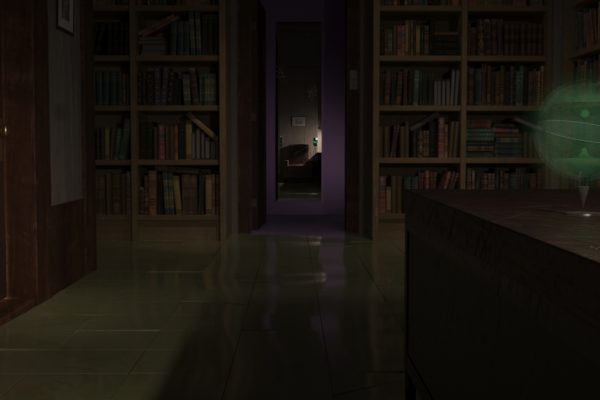